Is the U.S. economy experiencing a “growth recession”?

To read the full article, see the Investment Strategy Quarterly publication linked below.

The Fed and the market are going to have a tough time during the last quarter of the year with the economy showing no signs of slowing down. The strength of the employment recovery after the COVID-19 pandemic ended has continued unabated and has been the reason why we still contend that the U.S. economy did not experience a recession during the first half of 2022, even though GDP numbers showed two consecutive negative prints.

In fact, some economists are calling the current environment, or the path that the Fed should follow in the coming quarters, a growth recession. That is, an economy growing very slowly but shedding jobs along the way, so wage pressures start to recede and help push inflation back to the 2% for the personal consumption expenditures deflator the Fed has established as its inflation target. 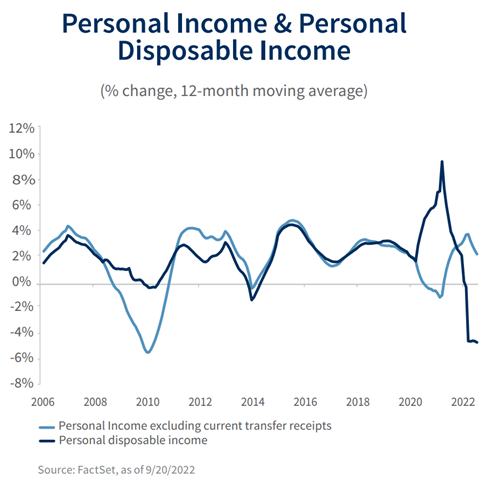 To raise or not to raise

However, there isn’t a unique path to this new scenario. Certainly, the preferred path for the Fed is one it has some relative control over. That is, to continue to increase interest rates until the economy falls into a recession. The second path, however, is to have patience and allow the current increase in rates, plus the ones baked into market expectations for the rest of the year, to do their job. However, for this strategy to be successful, it will need help from the labor force participation rate, or something like what we saw in the August jobs report.

The August jobs report saw employment up by a very strong 315,000. Strength in employment in August was broad based, according to the establishment survey of employment. But the most important detail of the August employment number was the increase in the labor force participation rate, which pushed the rate of unemployment from 3.5% in July to 3.7% in August. This was the result of a 786,000 increase in the civilian labor force after several months of decline. 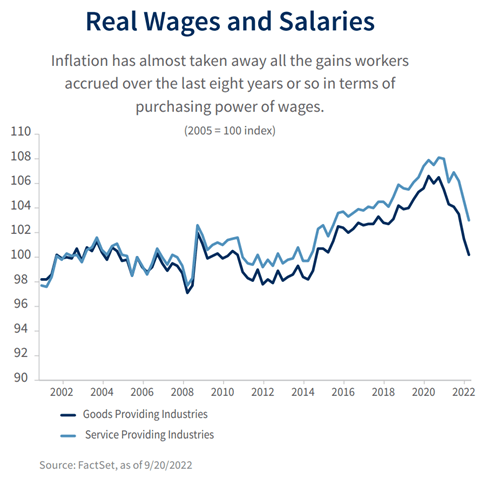 An increase in the labor force participation rate would be a best-case scenario for both the Fed and the markets, as the rate of unemployment would increase, reducing pressures from higher wages on inflation which, today, is at the top of Fed officials’ concerns. But wishing for this strategy to work its magic is close to asking for a fairy-tale ending for this highly unusual business cycle.

Thus, the risk is that the Fed overplays its hand and increases the federal funds rate more than what would be necessary to bring inflation down if it had more time.

If we look at incomes, real personal disposable income is declining due to the aftereffects of the large fiscal effort made during the COVID-19 pandemic. However, a closer look at the composition of income shows that although personal disposable income is declining, personal income excluding transfer receipts is still increasing, albeit at a much lower rate than before because of higher prices.* This could indicate that the Fed may have some more work ahead in terms of slowing down the economy.

Furthermore, the U.S. economy can generate higher real wages and salaries without triggering higher inflation. Perhaps the biggest issue today for the Fed is whether we will go back to a pre-pandemic economic environment in which inflation is an afterthought; or whether inflation is going to persist once the special conditions created by the pandemic are finally out of the system.

Reforming our immigration system will also be of great help in moving both the rate of unemployment and the labor force participation rate higher because the pool of available workers will increase. 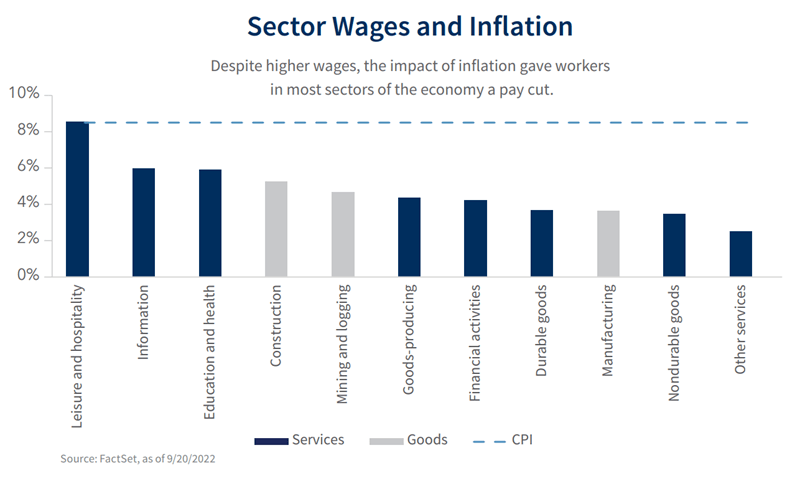 These issues are not small and are very difficult for only one institution like the Fed to tackle, because some of them are not within its sphere of influence. However, the way in which these issues are solved will ultimately determine how high the Fed must go in terms of interest rates, and for how long as well as how deep a recession will be needed to tamp down the inflation monster. We believe that the U.S. economy could go back to pre-pandemic conditions with lower rates of inflation once all the supply conditions come back to more normal levels.

* Transfer receipts are benefits received by persons for which no current services are performed. They are payments by government and business to individuals and non-profit institutions.

All expressions of opinion reflect the judgment of the author, the Investment Strategy Committee, or the Chief Investment Office and are subject to change. Past performance may not be indicative of future results. There is no assurance any of the trends mentioned will continue or forecasts will occur.